No clubs or societies listed yet.
If you run a WW1 club or society in the Whitstable area and would like to be listed, please get in touch.

Whitstable in the Great War

Welcome to the town page for Whitstable. Explore your town map to discover people who lived in your town during the First World War.

Whitstable has always had a strong connection with the sea through fishing, the harvesting of oysters, and ship repair. It has also acted as a port for Canterbury, and this role was enhanced when Whitstable port was redeveloped and became a railway-owned harbour used for the import and export of goods. During the First World War, the harbour and rail link were of importance when munitions and other goods were sent from there to the Western Front. Ship repair work continued during the War in several of the boatyards situated in Whitstable, including Goldfinch’s Yard.

There was a visible military presence at Whitstable, with various regiments being stationed in the town during the First World War, including a reserve of the Cheshire Battalion. Wounded and convalescent soldiers were treated in the town, some in Tankerton Military Hospital, and others in smaller hospitals. These smaller establishments included the Barn Hospital and also The Royal public house which started out as a convalescent hospital for soldiers.

Situated on the Kent Coast, Whitstable was raided by both Zeppelins and Gotha bombers throughout the War. Air defence was limited, although there is a record of a battery at Seasalter. Later in the War, further air defence was supplied by Manston aerodrome, but in the early days the available aeroplanes could not climb to the same altitude as the Zeppelins and so were ineffective. 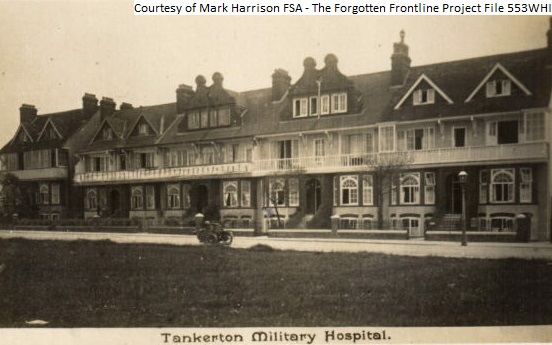 The Tankerton Military Hospital, Marine Parade, Tankerton near Whitstable. The site is now the Marine Hotel. 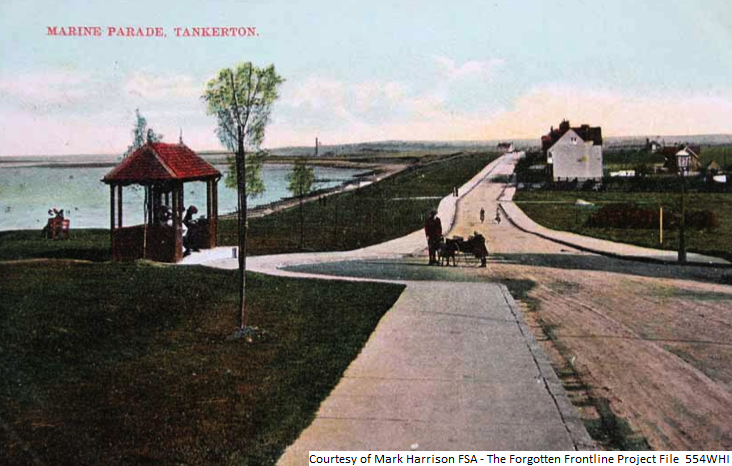 The coloured postcard above, postally used in 1908, shows the building that would later be used as the hospital beyond the horse and cart.

Barn House was used as a convalescent home during WW1. We are not sure exactly when this postcard was sent, however it seems to be after the War as it talks about 1918 in remembrance. The house, however, is what it would have looked like during the War. 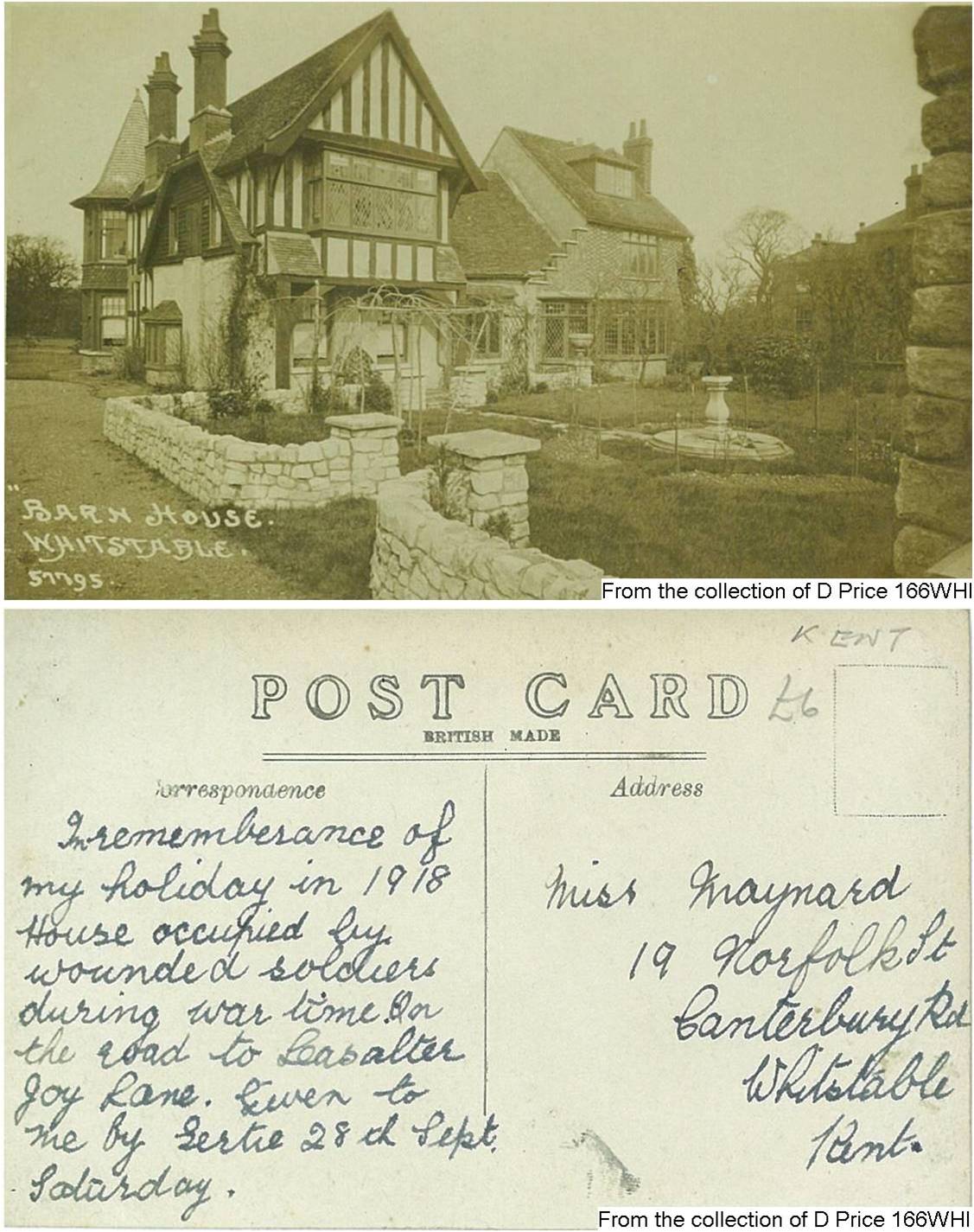 ‘In remembrance of my holiday in 1918, house occupied by wounded soldiers during war time on the road to Sea Salter, Joy Lane given to me by Gertie 28th September Saturday'

This postcard shows that preparations for the wounded were already being made 1 day after War was declared. The postcard was sent 5th August 1914. 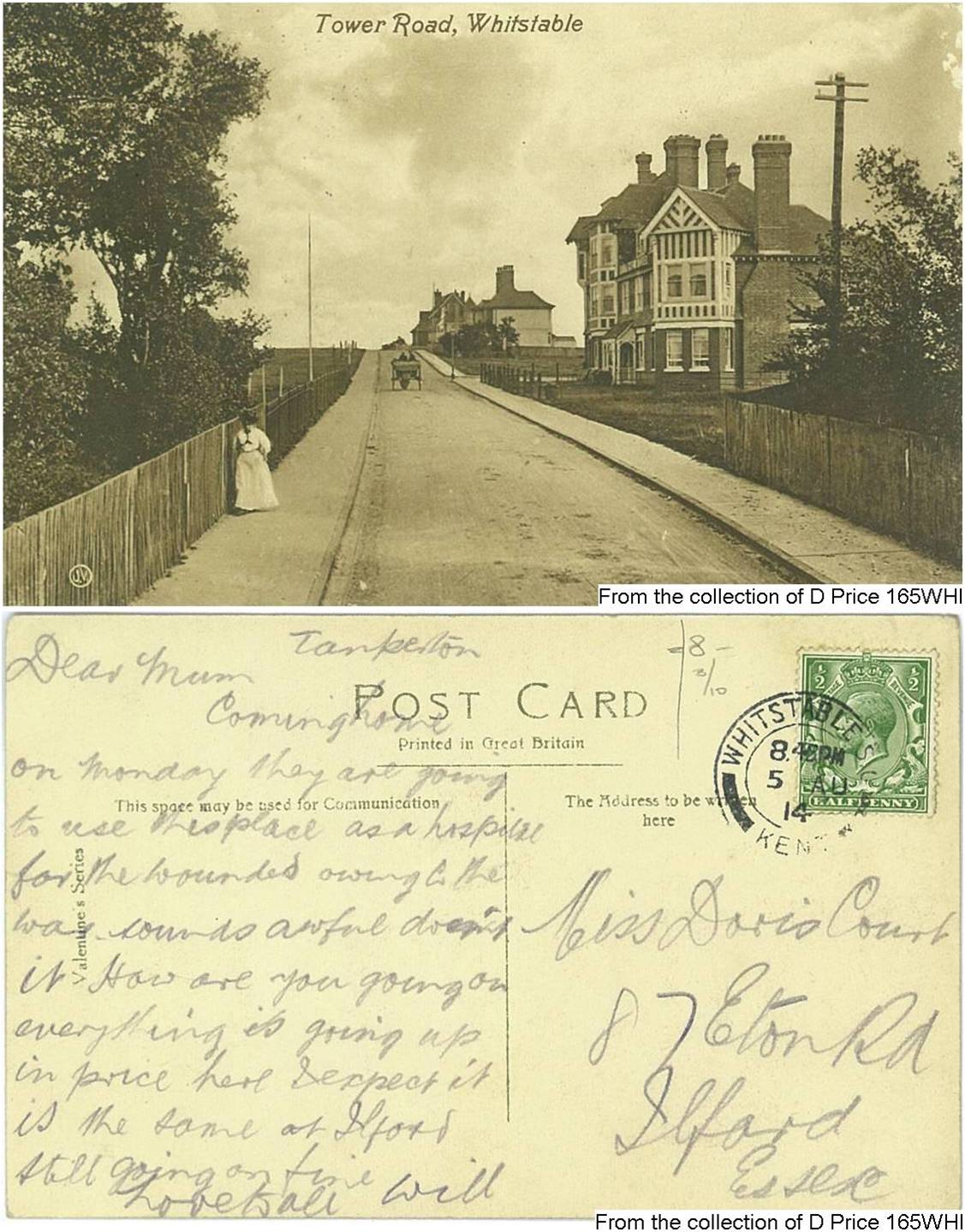 ‘Dear Mum. Coming home on Monday they are going to use this place as a hospital for the wounded owing to the war sounds awful doesn’t it. How are you going on everything is going up in price here I expect it is the same at Ilford. Still going on fine love to all Will.’