St Margaret’s in the Great War

Welcome to the town page for St Margaret’s. Explore your town map to discover people who lived in your town during the First World War.

In St Margaret’s you will find a memorial to honour the 2,000 men who died defending the Straits of Dover and the southern North Sea from attacks by the German Navy. It is located in St Margaret’s Bay at Lethercote Point and is one of three obelisks raised by public subscription in 1921. Erected to represent the three nations involved in the Dover Patrol, it is partnered with a similar obelisk in France, atop the Headland ‘Cap Blanc Nez’, and one in America, at New York Harbour.

The Dover Patrol had many important functions during the war. These ranged from defensive roles, such as guarding convoys sailing across the Channel, to offensive roles, such as the raid on Zeebrugge during April 1918 and the shelling of German positions on the Belgian Coast. The Dover Patrol was also tasked with preventing German U-boats from using the Channel as a short cut. Night patrols, minefields and nets were all used to keep the seas free from German control. Even after the Armistice in 1918 the Dover Patrol continued its mine sweeping operation.

In 1918, as an eerie mirror to Dover’s history, St Margaret’s was the last place in which a bomb fell on British soil. To commemorate the history of the town and the local residents who were active in all three services and the Mercantile Marine, there is a memorial inside St Margaret’s Parish Church: inscribed on a tablet is a roll call to those who died in the First World War, and a record hangs nearby of those who survived.

Thirty- one men from St Margaret’s were killed in the war. Lt Col Christopher Bushell, whose parents lived in the village, was awarded the Victoria Cross after leading his battalion in a counterattack and showing tremendous courage, despite being badly injured. Another notable village casualty was Captain Alexander Little, Australia’s highest scoring air ace, who had come to England to fight in the war and married a Dover girl who he set up home with in Drovewat Gardens. He was killed in France on the night of 27th May 1918, after attempting to intercept enemy bombers. He was 22.

Those who did not sign up still tried to ‘do their bit’. Eighty-seven village men joined the Kent Special Constabulary and a ‘Home Defence Corps’ was formed in 1914 with drills twice a week and a route march on Sundays. Local ladies joined the Red Cross or the VAD’s (Voluntary Aid Detachment) and eight ladies served as nurses in the ‘St Margaret’s Ward’ at a VAD hospital in Walmer. As well as this, over 8,500 knitted items were sent to men at the Front or for the wounded being landed at Dover. Plans were also made to evacuate the village in the case of invasion. Women and children were to be taken out by carts to Waldershare Park, all able bodied men were to stay behind.

3. St Margaret’s History Society The Bombing of the Village

The Bombing of the Village

Two bombing raids were made on St Margaret’s, both in 1918. On the 16th February at 9.35pm a German Gotha dropped 23 heavy bombs on Bay Hill and Sea Street. Several homes and the Convent were damaged but no one was hurt.

A second raid was made by moonlight on 19/20 May in conjunction with a raid on Swingate airfield. Six bombs landed in the village in the same area as in February. These were some of the last bombs dropped on England in the First World War.

The village was surrounded by small airfields at Swingate (the Royal Flying Corps) and Walmer (Royal Naval Air Service). Swingate became locally known as ‘Swingate Cemetery’ due to the frequent pilot fatalities there. In 1918 a small airfield was also opened in the village in Reach Road, on the site of the present holiday camp. From here a flight of DeH9 aircraft carried out a constant anti- U- Boat watch.

Soldiers in the village

The main army presence in the village was the 6th Battalion, The Royal Regiment of Fusiliers, billeted at Portal House in Sea Street. Their main duty was to resist a feared invasion and to protect the precious cross channel telegraph cables connecting London with France. The building also served as convalescent home for wounded soldiers. A village committee was organised to provide recreation and entertainment for the troops billeted here.

With the frontline only a few miles away across the channel, most of the villagers of St Margaret’s were involved with the First World War effort in some way. Residents could hear distant gunfire from the French battlefields and watch sea battles from the cliffs. The village was surrounded by small military airfields and its roads were full of soldiers.

The last bomb to fall on Britain fell in this parish, and after the war the village became home not only to a local war memorial in the church but also to the impressive Dover Patrol Memorial on the cliffs. 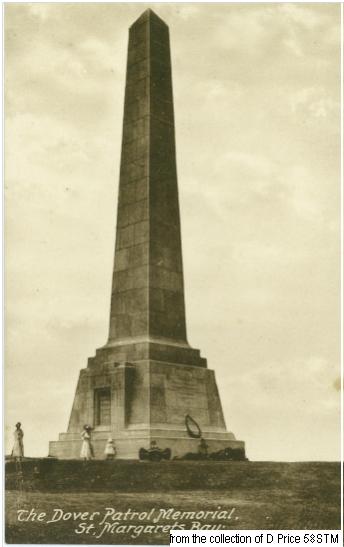 This monument was built by public subscription to commemorate the men of the Dover Patrol who were killed during the First World War. As a point of interest two other monuments were erected one at Cap Blanc Nez , France and the other overlooking New York Harbour. The Dover Patrol was vital to keeping the shipping lanes of the Channel open during the First World War as the German Navy was very active in the Channel with both surface and U-boat operations. The vessels used were not only Royal Navy ships and submarines but included, amongst others, fishing boats of various sizes, paddle steamers and barges. Such was the need for patrol operations to protect ships crossing to France and also vital supply convoys using the Channel as a route to and from Britain.

The Dover Patrol was not purely a defensive force as evidenced by the raid on Zeebrugge and Ostend on 22/23 April 1918.