This picture is a rare capture of David Salomons house, who was the Hon Colonel of the Kent (Fortress) Royal Engineers and had built up a Territorial force from 1912.

His only son Reginald was also a member of the regiment. These men were sent together to Gallipoli and were aboard the HMS Hythe ready to land at Helles when their ship was sunk by a British troopship The Sarnia. Over 150 men lost their lives that night, including Reginald Salomons, with 79 members of the KFRE 1st /3rd Company.

The full story of the Hythe disaster can be found in the book Southborough Sappers of the Kent (Fortress) Royal Engineers by Frank A. Stevens (2000). 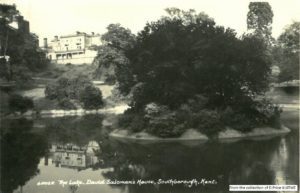