Sandwich in the Great War

Welcome to the town page for Sandwich. Explore your town map to discover people who lived in your town during the First World War.

Sandwich is one of the original Cinque Ports, and although the sea had receded and the port silted up long before the beginning of the First World War this historical association of the town with the defence of Britain was maintained by the development of a port at nearby Richborough.

Development of the Q port at the Richborough site started mid-1916. It was situated on the site now known as Discovery Park (formerly Pfizer), and there are very few indications of the port visible today. The port was primarily designed to improve the movement of munitions – but also to assist with the movement of men – to the Western Front. It was a secret port and evidence of its activities is scarce. The River Stour was dredged and the railway link and port were mainly built by the Royal Engineers. Up to 5,000 men were stationed in three camps and a military hospital was based at Richborough Camp.

An important innovation which took place at the port was the development of roll-on-roll-off ferries that enabled the loading of trains directly onto the ships. This speeded up loading and unloading and allowed the movement of munitions and men by railway, rather than by heavily congested roads, to the Western Front.

Even before the development of Richborough, civilians in Sandwich would have seen the presence of the military as several battalions were stationed in and near the town before they went overseas.

Men from Sandwich served in all the forces and in all theatres of the First World War. 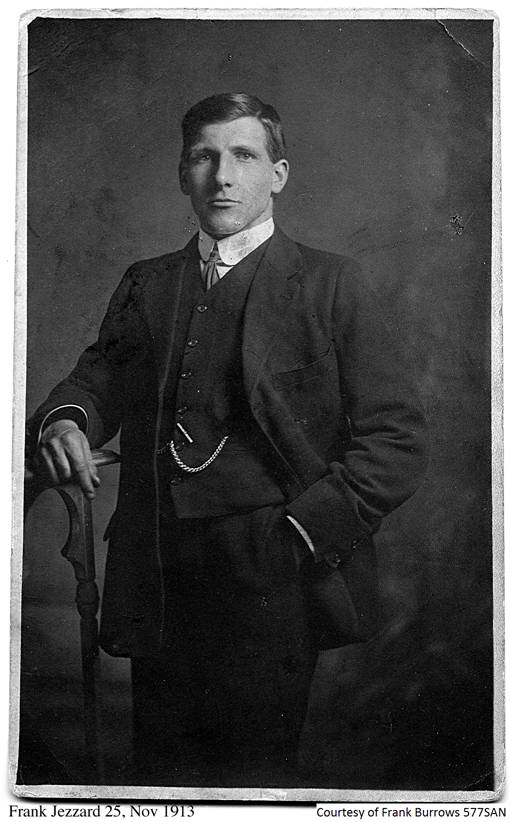 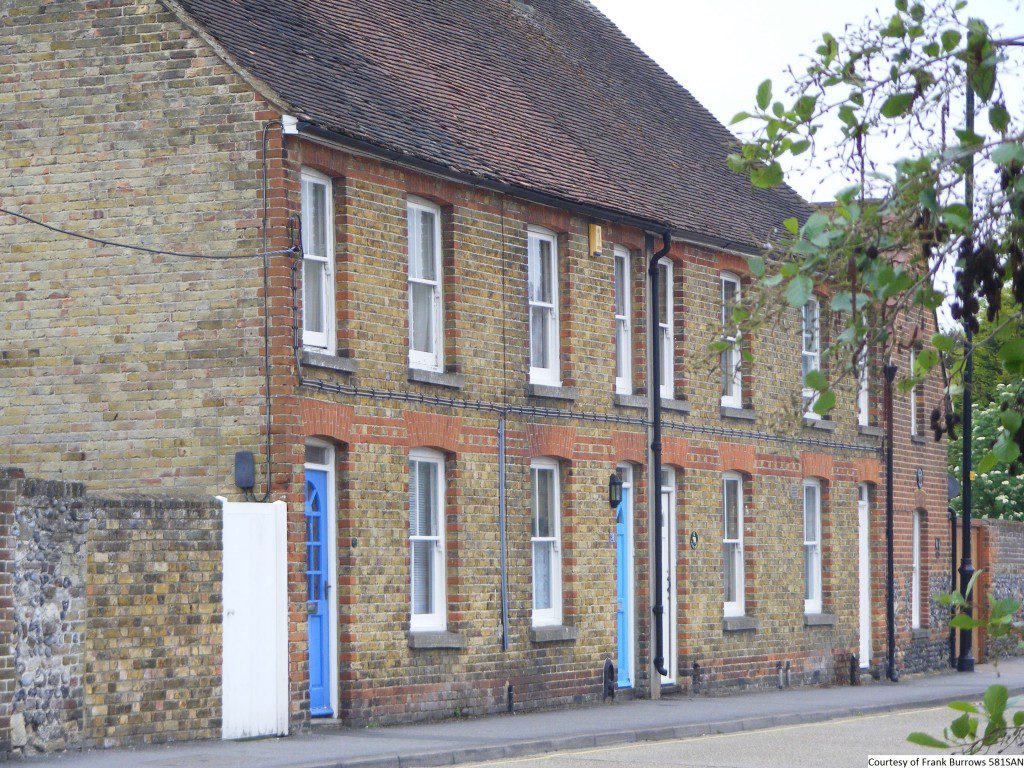 I don't know the reason, but I am aware that he traveled to Calais when he was 13 for some kind of training, this would have been around 1904. I know he started in the Royal Navy, but it was his work in deciphering German morse code in about 1916 that earned him the MBE from King George V: 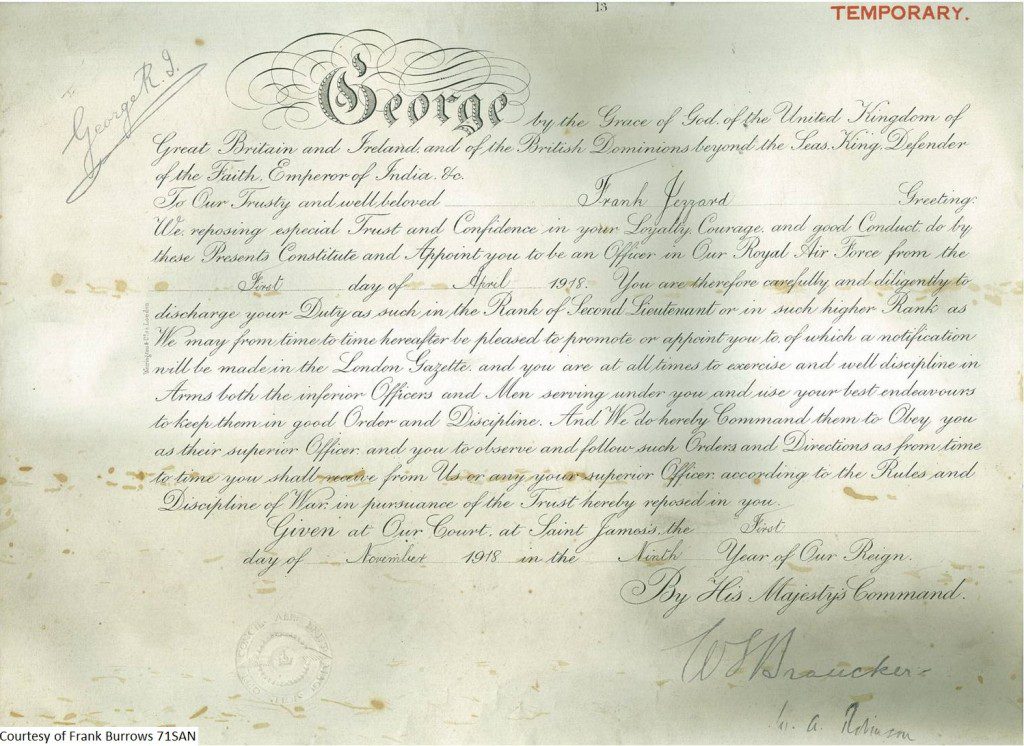 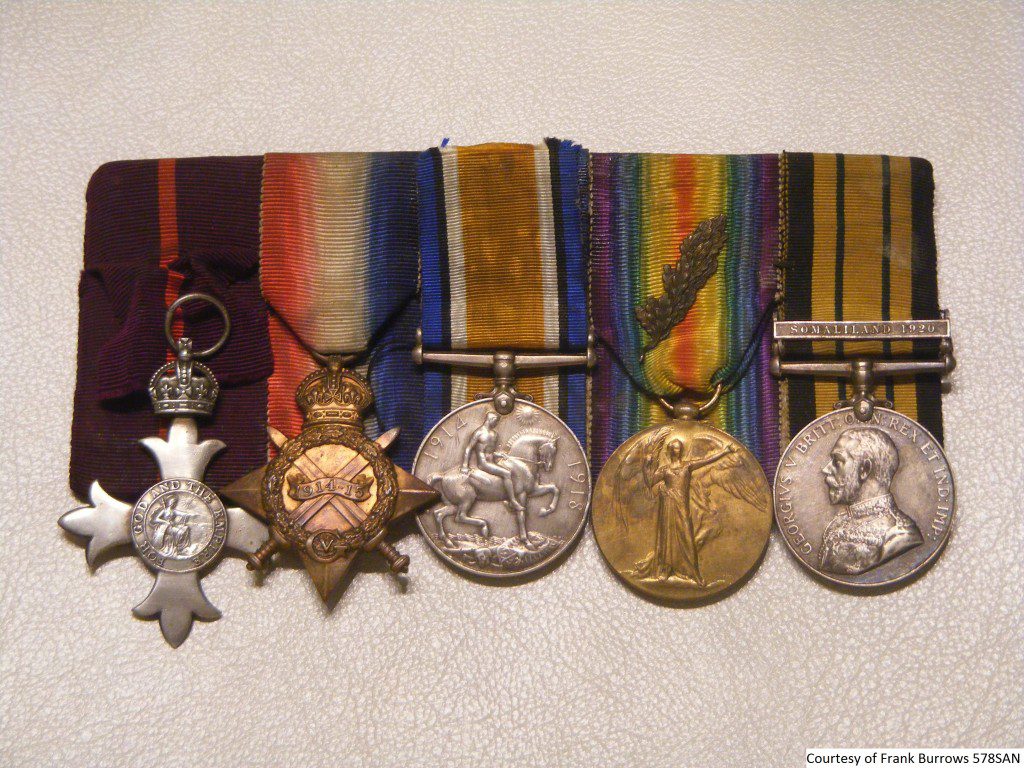 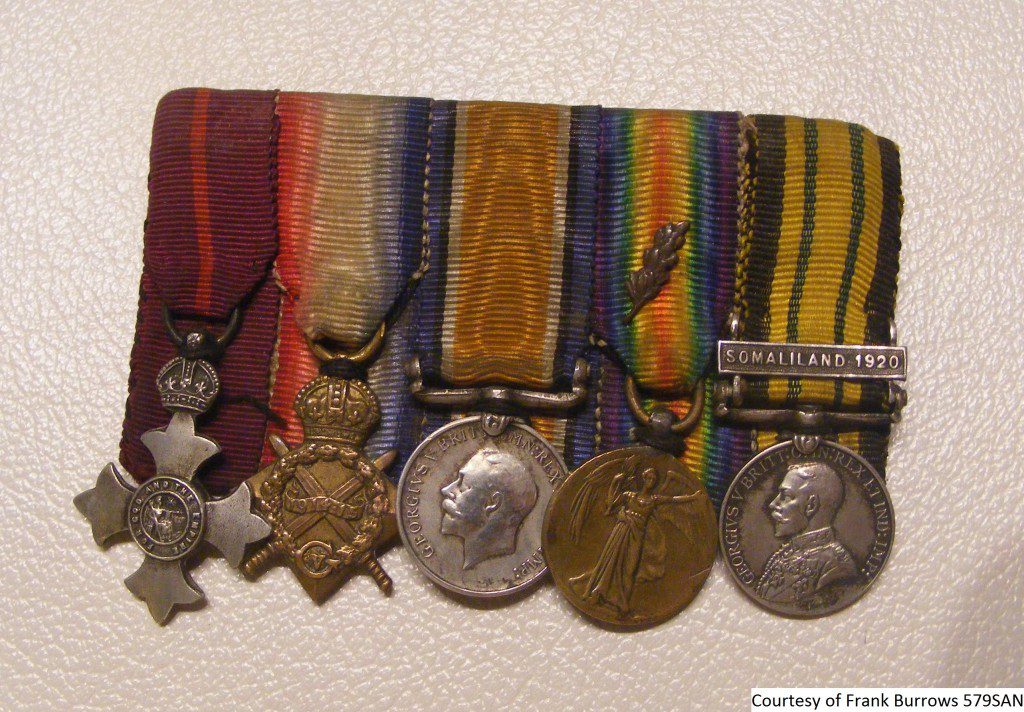 Frank married in May 1916 and then progressed to the Royal Flying Corps. a precursor to the RAF where he stayed until his untimely death in March 1928 studying for his night flying license. He graduated to the rank of Flight Lieutenant and he used to fly over his wife's (my Grandmother) house and stop and start his aircraft to the Morse of 'F' ! He also did the loop the loop!

Below is an image of my Grandfather's electrical wiring of an aircraft certificate which was issued a month before his untimely death in 1928. 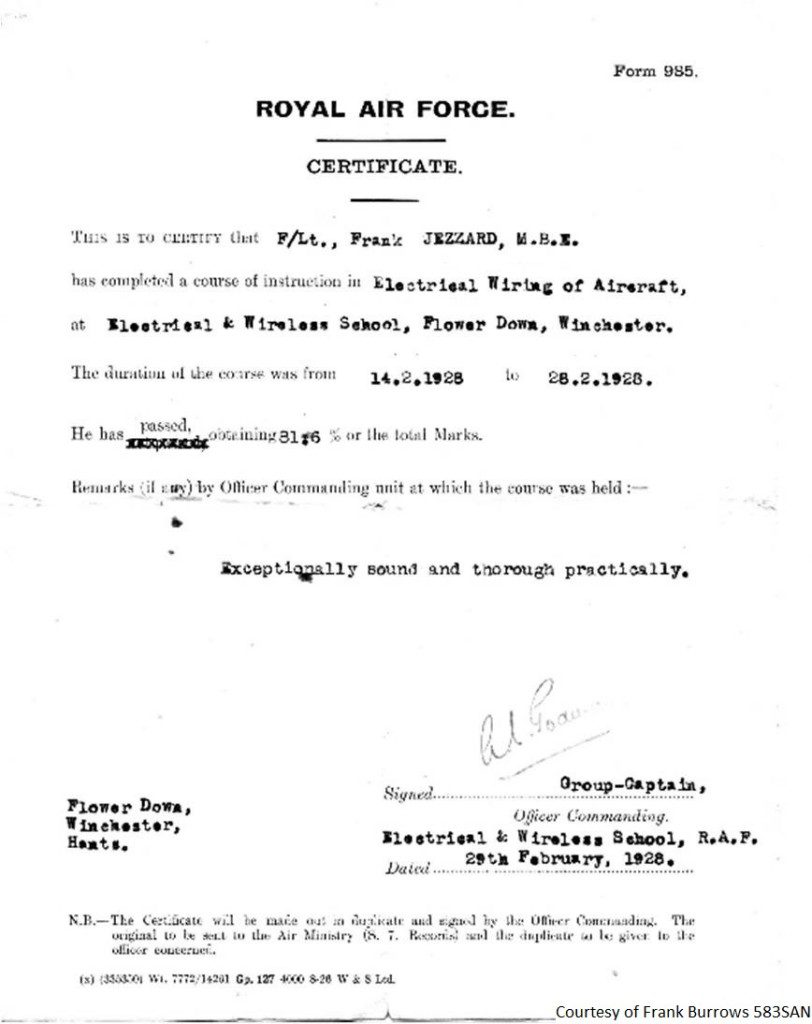 Frank flew an Avro 504N single engine plane which I believe he was killed in.' 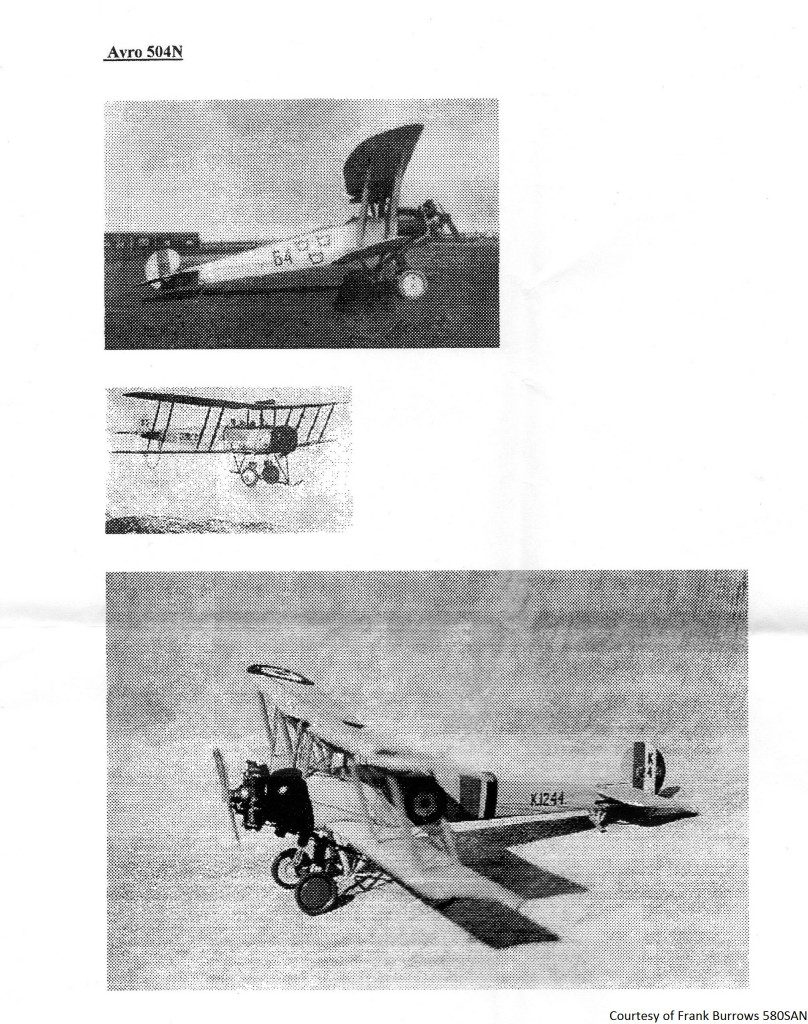 
A searchlight was set up in a field in the village, and was manned by local Home defence soldiers. Percy is the one standing at the very end on the right.

If my history serves me, searchlights were under the control of the Sappers. My Grandfather served during WWI at Richborough as a member of the Royal Artillery.

‘When I was about 4 or 5, my grandfather, Percy told me a humorous memory of his. The story occurred in World War I. Some men from the group were on watch by night for fires, aeroplanes, Zeppelins etc. They were based in the top storey Brewey Farmhouse. They heard a droning sound and went on the alert for planes coming over--only to realise that it was the farmer sleeping on the first floor up, below them, snoring! The farmer was Mr Solley.’


The picture above shows Percy again this time sitting at the front third from left. He has a moustache. The round cap badge is for the Sappers (Royal Engineers) and those with the royal coat of arms cap badge are GS/LC (General Service/Labour Corps); both Corps would have been at Port Richborough in large numbers.
Courtesy of the Great Mongeham Society

"The Old House, Sandwich", posted in 1917 by Len Whitehead to his mother in St Mary’s near New Romney. The Old House was situated by the river, but whether Len Whitehead chose the postcard because he was billeted at the Old House is unclear. However, the postcard demonstrates that Sandwich was used for billeting soldiers who were attending firing courses locally. 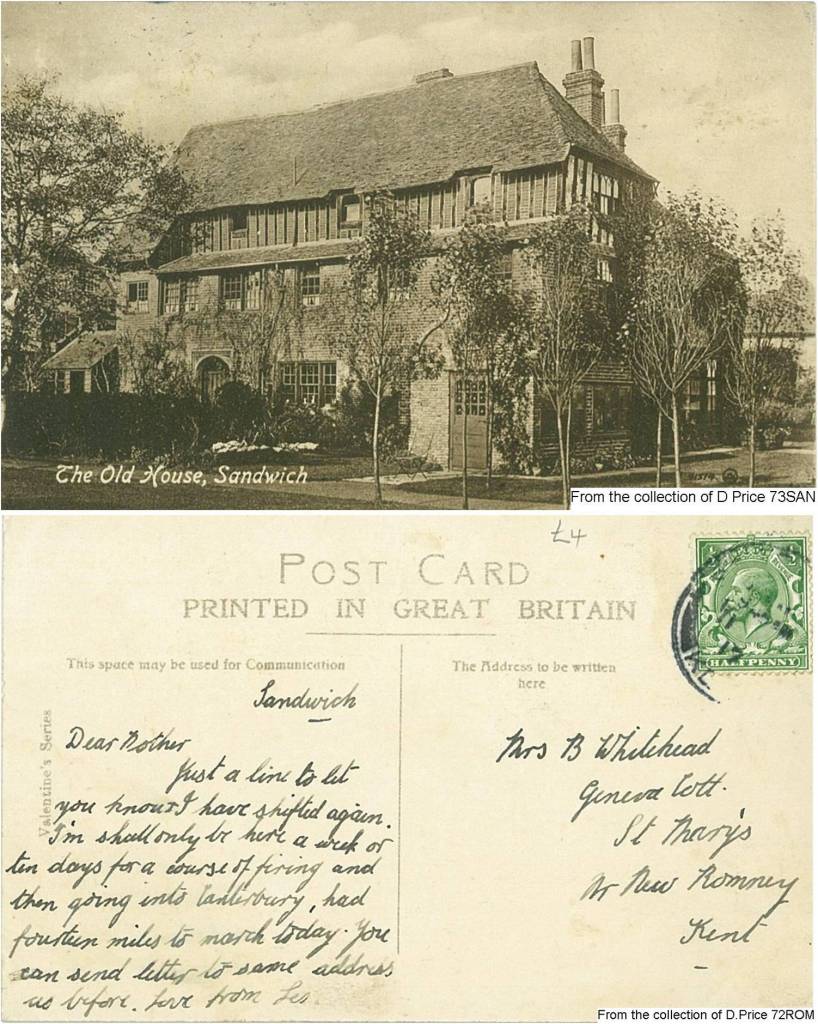 'Dear Mother, Just a line to let you know I have shifted again. I'm shall only be here for a week or ten days for a course of firing and then going into Canterbury, had fourteen miles to march today. You can send letter to same address as before. Love from Len.'

(To see another postcard from the same family see 214ROM) 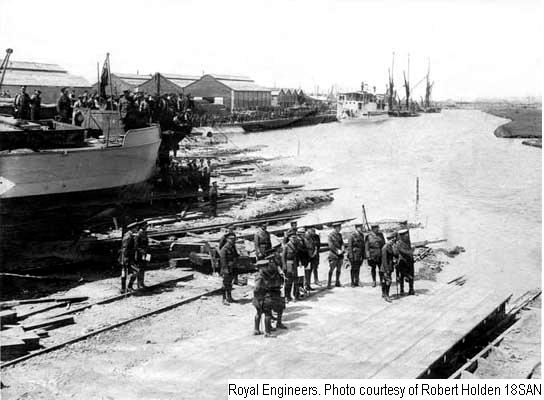 This photo shows Richborough Port looking towards the sea and gives some idea of the size of the installation. Of particular interest is the barge being built on the slipway on the left of the picture- Richborough Port had workshops and a smithy to facilitate the construction of vessels. 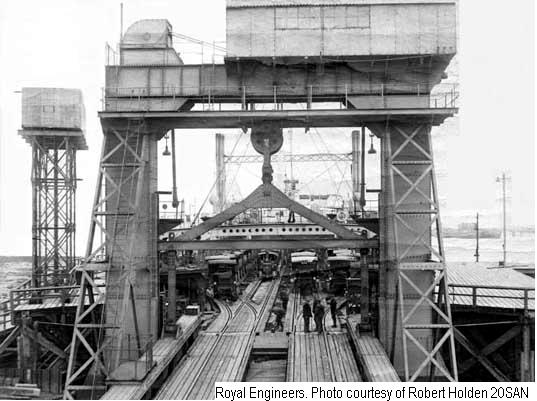 This was probably taken in 1918 as the Port is very developed, the large Gantry Crane was one of a pair. Also note in the foreground the rails which enabled trains to be transported straight onto the ferries. 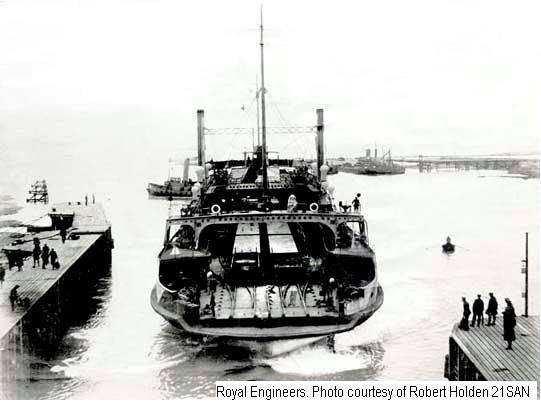 Ro-Ro ferry at Richborough Port, note the rails visible at the stern of the ship. 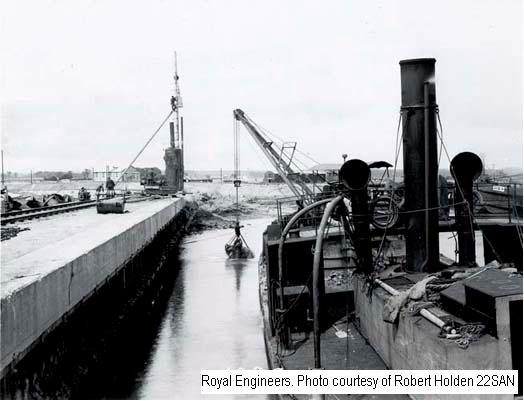 This picture shows the very early stage of construction at Richborough Port looking towards land, probably taken in 1916. Before the port could become operational extensive dredging had to take place as shown here also the railway had to extend down to the Port and there are rails visible in the left of the picture. Some of the camp buildings are visible but ultimately there were three separate camps at the facility.

93. Boats on an exercise at Richborough Port 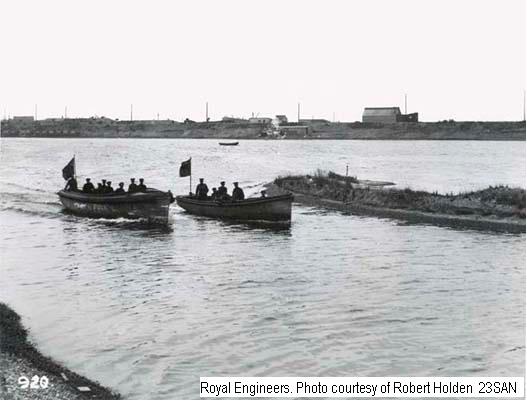 The photograph here shows boats on an exercise at Richborough Port. The date is unknown but it is post 1916

94. Early example of a roll on roll off ferry 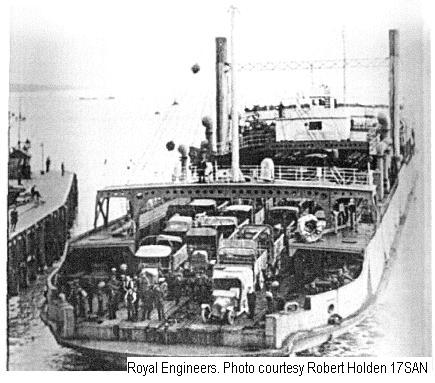 Richborough Port was a Q (secret) port developed during the First World War to increase the capacity to move men,ordinance and supplies to the Western Front. This photo shows an early example of a roll on roll off ferry- these ro-ro ferries were first developed at Richborough Port and were capable of taking trains- this picture shows a laden vessel leaving the port and probably dates from 1917.