If you are visiting Dymchurch, you can follow our Heritage Trail.

Dymchurch in the Great War

Welcome to the town page for Dymchurch. Explore your town map to discover people who lived in your town during the First World War.

Despite its size, Dymchurch has a long history as an important part of the defences of the South Coast. During the Napoleonic conflict three Redoubts and many Martello Towers were built along the coastline to defend against invasion; Dymchurch is home to three of these Martello Towers and one Redoubt. During the Great War, the Redoubt was commandeered as accommodation due to the large amount of troops based within the Dymchurch area.

The reason for such an increase in troop movements in the area was partly due to the Royal Flying Corps’ Machine Gun School which opened in 1915. To begin with, Lympne was used as the closest airbase, with the local town of Hythe being used for its ranges; however, as the school became more successful it was agreed that there was a need for a base within the town. In February 1917, the school was moved to a newly built airfield close to the Dymchurch Redoubt.

Dymchurch only has a brief history as an active airfield: in 1918 the school was renamed the ‘No. 1 Observer School of Aerial Gunnery’, and eventually moved to New Romney. For a short while, the airfield remained on as an emergency field for the local ranges; however, in 1919, it was officially closed down.

Today, within the streets of Dymchurch, you can find the Dymchurch and Eastbridge Civic War Memorial, which was unveiled in 1920. As well as this, there is a Roll of Honor inside the Church of St Peter and St Paul that serves a dedication to the local residents who died during the First World War.

1. A Postcard from Edward Horn

Edward (Ted) was born in 1889. He worked on the farm and married Harriet (Harty) in 1918. In the mean time, he was conscripted into the army in Suffolk, the need for men on the Front must have been greater than the need for food, but the war ended before he was sent to fight. Harriet Howland played her part and ran a hotel in Canterbury as far as I know. A card from May 4th 1915 said that he had been to Dymchurch and: 'heard the guns from Dover today to keep the Germans off'.

4.5.1915: 'Dear Eddie and all just a card have been to Folkestone today and got there quarter past 8 o clock and then to Hythe by bus and then walked 4 and a half miles to Dymchurch to Harty's Aunt's. We heard the guns at Dover today to keep the Germans off. Is in the paper tonight. Hope Fred is not gone love from T & H xx' 'have been by here today.'

2. The story of the men from these Villages who went to War

'We have compiled A book telling the story of all the men from the village who went to war of those who sadly died. Dymchurch, Eastbridge, Orgarswick and Blackmanstone; The story of the Men from these Viallges who went to War 1914 – 1918. Although our War Memorial has 10 names, our list has 29.' 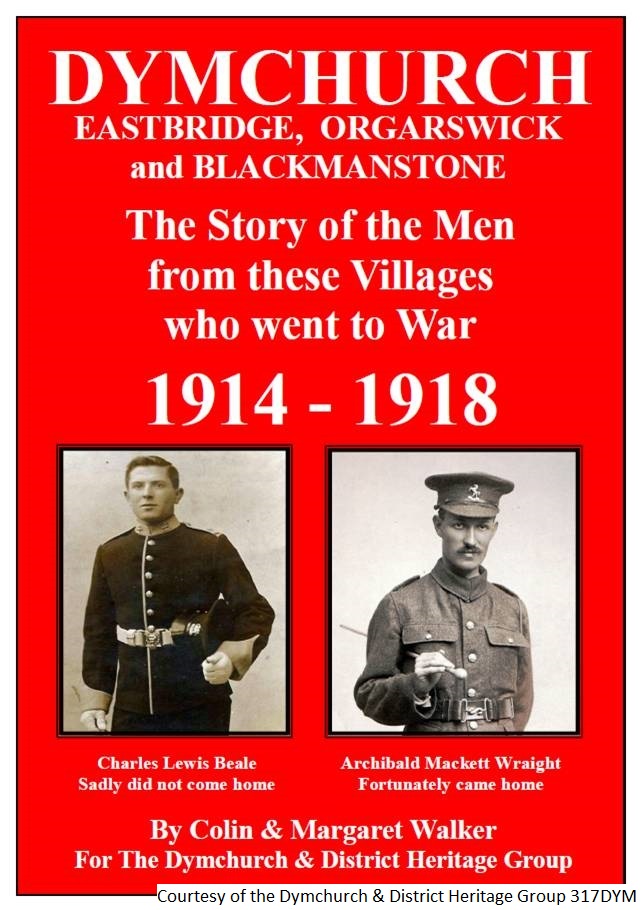 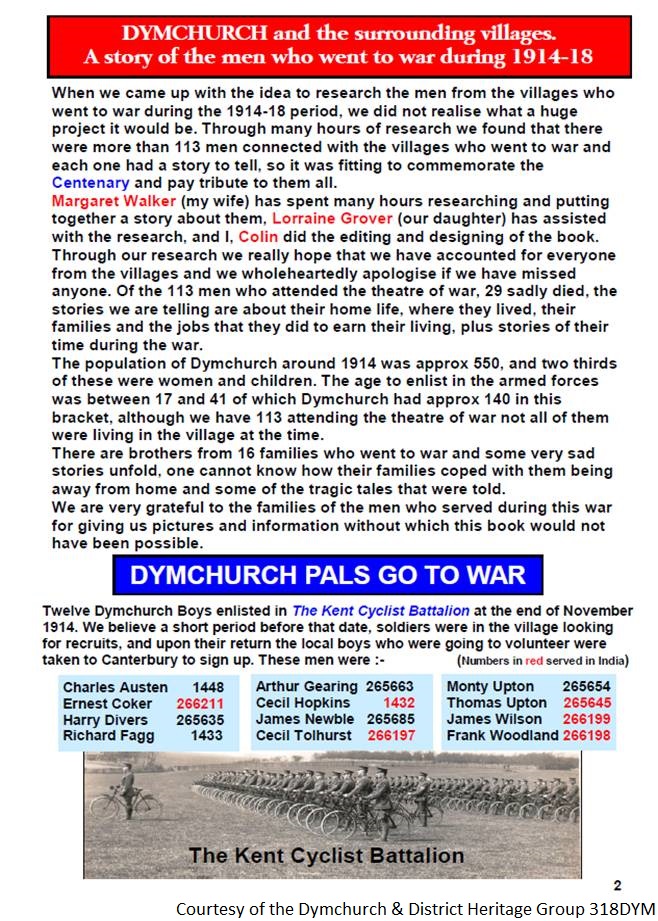 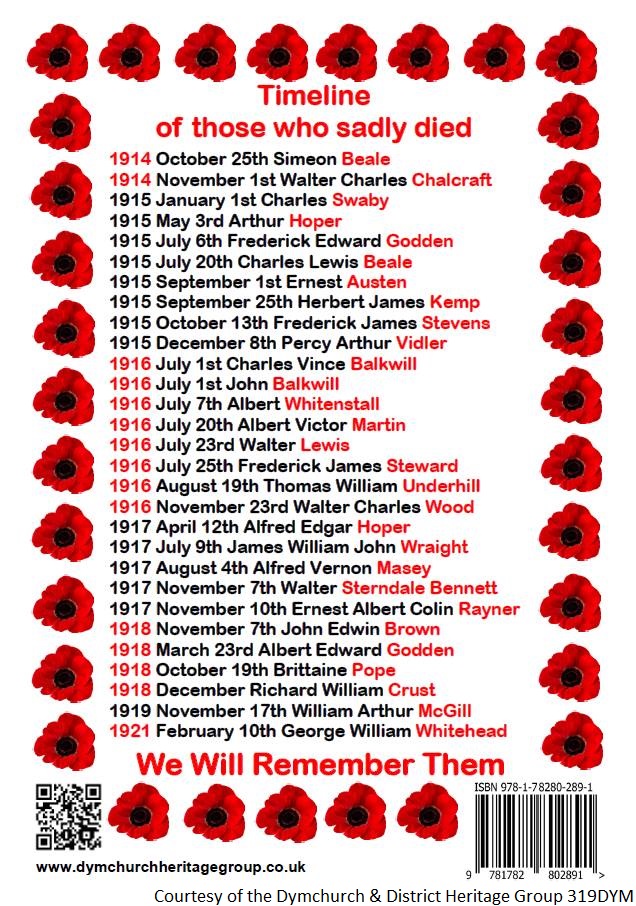 'There are men like Brittaine Pope who was serving in the English Channel on MTB's and was taken ill. His boat came into Sheerness to get him care, but sadly that day he died from Spanish Flu. Plus we have many men who were born in the village and moved away, so we feel that they should also be remembered.'

'Then we have George William Whitehead who didn't die till 1921 through the effects of being gassed in the trenches, his family fought to get him a WW1 memorial and finally the Ministry of Defence agreed in 2004.' 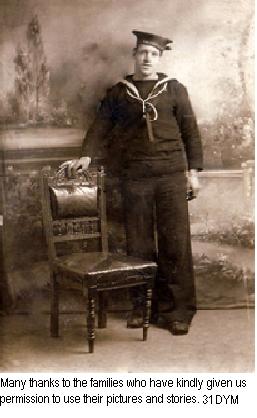 'Brittaine was born in Dymchurch in 1886 and was the son of Henry & Martha Pope who lived at Dunkirk End, St. Marys Road, Dymchurch, Kent.' 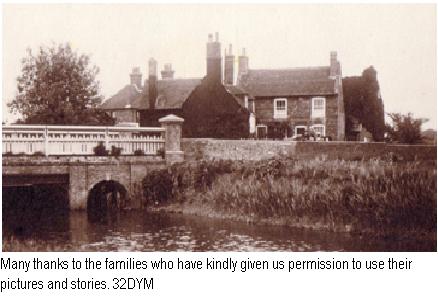 'Sadly having survived the war, Brittaine came home and succumbed to the Spanish Flu, he died on the 19th October 1918.'

'Leslie James Simpson was born in 1875 in Dymchurch, Kent. The Family business was a Coal Merchants situated along the Dymchurch High Street. Leslie became Gunner 85797 in the Royal Garrison Artillery and survived the war.' 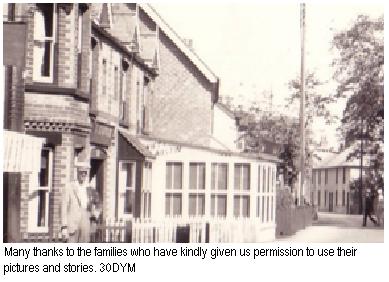 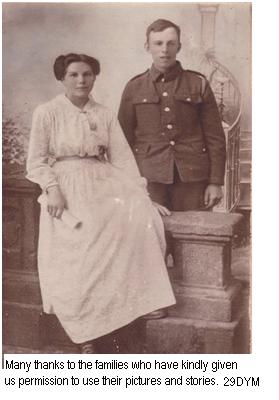